MINTABLE EDITORIAL
MINTABLE ACADEMY
HomeGuidesWhat Are NFTs and How Do They Work?

What Are NFTs and How Do They Work?

NFTs are non-fungible tokens. They are a type of cryptographic token that lives on the blockchain and are used to represent digital assets. Specifically, NFTs provide a way to prove ownership and authenticity of digital asset, which is something that wasn’t really possible before because of how easy it is to copy digital files. This is why there’s so much excitement around them.

If you’re reading this article, it’s probably because you’ve caught some of the increasing buzz around NFTs and you’re wondering what it’s all about. This guide is here to help you understand the technology and the properties of NFTs that people have been getting people excited.

Before we delve into explaining NFTs, let’s first explore the underlying technology – the blockchain.

A blockchain is a distributed digital ledger.

In this way, the blockchain differs from traditional centralized databases, where information is processed and stored on just one server.

The diagram below shows the difference between a centralized and distributed network of computers, with the grey lines representing the flow of data.

In a distributed network however, data is processed and stored by every computer, or node, in the network. Every node in the blockchain gets a copy of the entire ledger, and can add new records to it. The majority of nodes must agree that new transactions are valid before they can be added to a block.

This makes the blockchain secure, because you would need to hack more than half of the entire network to compromise the data in the blockchain. (The Ethereum network, where most NFTs live, has 8,218 nodes. That’s a lot of hacking!) It also promotes transparency, because everyone in the network can see and verify data in the ledger.

The block of records is then added to the blockchain, connected to the previous block in the chain with a hash.

Blocks contain 2 hashes: their own hash, and the hash of the previous block. This is how a blockchain is formed: 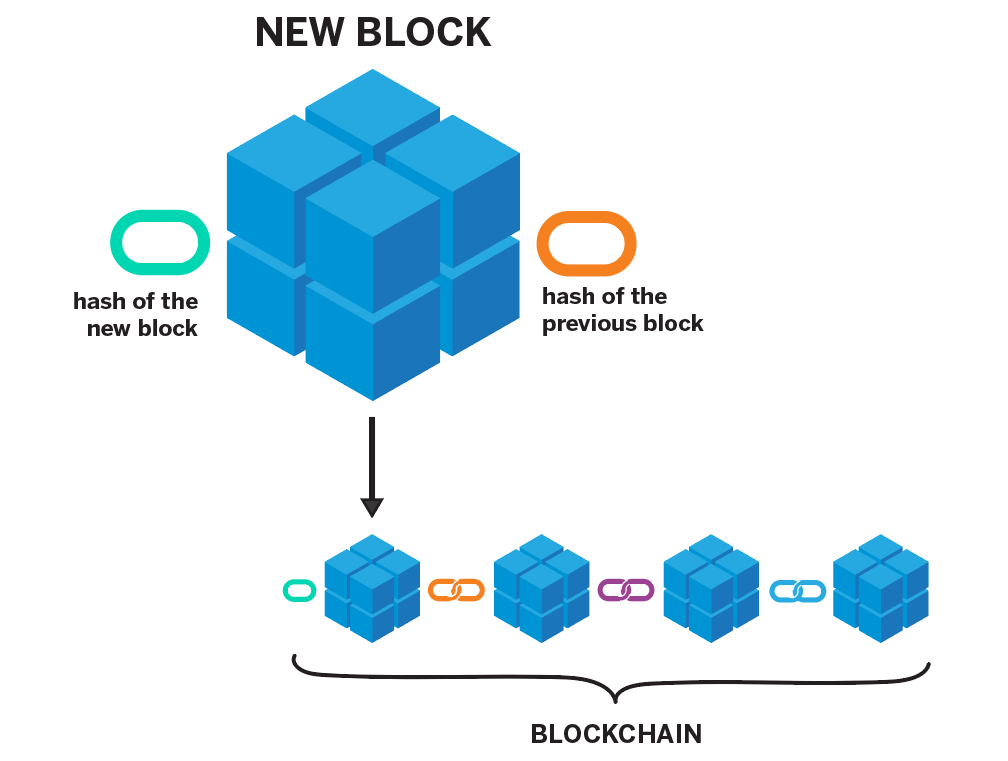 Because of the way blocks are connected, you can see all the historical records of anything stored on the chain. This creates complete traceability for digital assets stored on the blockchain such as NFTs.

Summary: A blockchain is a distributed digital ledger that is highly secure, immutable, transparent and traceable.

NFT is a non-fungible token that is stored on the blockchain.

Fungible items are mutually exchangeable. For example, cryptocurrency is a fungible token. You could exchange 1 bitcoin for a different bitcoin, and still have essentially the same thing: 1 bitcoin.

In contrast, Non-fungible means the tokens cannot be interchanged with one another. This is because non-fungible tokens are used to represent many different types of digital assets – you can’t exchange an NFT artwork for an NFT video and still have the same thing.

So how exactly does a non-fungible token represent a digital asset like an artwork?

The token’s metadata contains a link to the artwork’s digital file, which is stored on a different server. (Read our article on metadata to find out where and why). The token is therefore not the asset itself, but an representation of the asset, which you can interact with instead of the asset itself. 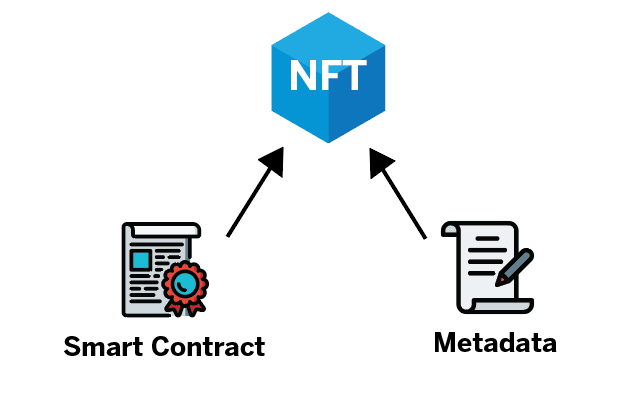 What is a Smart Contract?

Every time a transaction is made on the NFT, the code checks for certain conditions and executes relevant actions. For example, when someone buys an NFT, the smart contract will check if they sent the correct amount of money before executing the transaction.

Smart contracts can update the ownership of the token, manage permissions, and execute transactions. They can also automatically allocate royalties to the NFT’s original creator, based on the royalty rate set in the contract when the NFT was created.

Because it is a self executing code, smart contracts make the process of selling assets much more efficient. There’s no paperwork to be processed, no chance for mistakes to be made, no money to be paid to middlemen, and resale royalties are secured automatically.

What is NFT Metadata?

NFT metadata is data that describes the essential properties of the NFT. This includes the name of the asset, it’s description, the token’s address on the blockchain, and most importantly, the link to the digital asset itself.

NFT metadata can also contain other information, such as copyright licenses and bonus downloadable file links. To find out more, read our article on NFT metadata here.

Because NFTs are secured as smart contracts on the blockchain, anyone can check who the owner of the NFT is (by wallet address). This means that you can provide real evidence of ownership – something that was not really possible with digital assets before.

Because every transaction is recorded on the blockchain throughout the lifetime of the NFT, it can be traced back to its original creator, thus proving if a work is authentic. Traditional authentication services are time-consuming and costly, but NFTs have created a way to do this at the click of a button.

For some assets such as collectibles and unique artworks, value and desirability are derived from their rarity. Until now, digital collectibles could not exist because of how easy it is to copy digital files. NFTs, however, cannot be copied. If someone has an image of a digital trading card, but cannot show its token address on the blockchain, you’ll know it’s a fake.

Digital versions of some assets could retain their value for longer. For example, collectibles tend to be less valuable if they are not in mint condition. This physical deterioration cannot occur with digital assets. Because they’re secured on the blockchain, they also cannot be tampered with. You don’t have to worry about your NFT artwork getting chewed up by your dog, or colors fading from light exposure – they’ll always be in mint condition.

NFTs put power back in the hands of creators.

Because the blockchain is a distributed ledger that leverages peer-to-peer networks, it allows creators to sell directly to customers, thus cutting out middlemen and creating a more inclusive marketplace. Resale royalties can also be secured in the smart contract, which means that creators’ can make money throughout the lifetime of their work, rather than solely through the first sale. When you buy an NFT artwork, you’ll be directly supporting creators.

What is a Gaming Guild?

Since the NFTs and crypto have catapulted into the mainstream, crypto and NFT driven games have been the topic that’s hot in the crypto...
Read more

Ways to make money with NFTs

NFTs, also known as non-fungible tokens, have now overtaken the world in 2022. As NFTs live on the blockchain and cannot be exchanged 1:1...
Read more